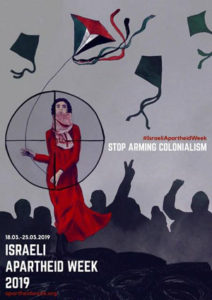 Columbia University’s Students for Justice in Palestine chapter has been accused for creating an anti-Semitic poster to help promote “Israel Apartheid Week.” courtesy of Columbia SJP/Facebook.

By JACKSON RICHMAN and SEAN SAVAGE (JNS) – It’s no secret that college campuses are often some of the most hostile environments these days for pro-Israel and Jewish students. From BDS resolutions to anti-Israel speakers, young adults are often on the defensive for openly supporting Israel on campus. However, for one week each year, many campuses across North America and around the world are transformed into hotbeds of anti-Israel programming and events known as “Israeli Apartheid Week” (IAW).

Beyond the usual pro-BDS and anti-Israel rhetoric, several campuses stood out for their activities, events and choice of speakers.

Harvard University’s undergraduate council voted on Sunday, April 7, to give $2,050 to the Palestine Solidarity Committee to add to their IAW a physical “Wall of Resistance,” sponsored by 14 students groups, including Harvard College Democrats, Palestinian speakers and a student panel, reported the school’s newspaper, The Harvard Crimson.

“This openly anti-Zionist event frequently crossed the line into outright anti-Semitism, including conflations of Zionism with ‘white supremacy,’ and enthusiastic chants to free Palestine ‘from the river to the sea,’ which is commonly understood as a call for the destruction of Israel as a Jewish state,” CAMERA campus coordinator Zac Schildcrout told JNS. “These radical ideas that demonize Jews are bigoted and should be passionately countered by the Harvard community.”

The funding came from the student government’s Grant for an Open Harvard College that subsidizes “compelling interests,” which include “mental health, race, culture and faith relations, sexual assault and harassment prevention, social spaces and financial accessibility,” reported the Crimson.

A student representative said the Palestinian initiative falls under the “race relations” section.

A number of Jewish students at Harvard spoke out.

“One of the speakers slated to come, Omar Barghouti, has said that he supports the euthanasia of Zionism,” said sophomore Gabriel Dardik. “Really, it makes me feel unsafe that this kind of person could come here.” Barghouti co-founded the BDS movement.

‘About abolishing the Jewish state’
IAW held on campuses and at venues throughout the world is largely coordinated and supported by the BNC (BDS National Committee), a Ramallah-based coalition in part made up of U.S. and E.U.-designated terror organizations such as the Popular Fronts for the Liberation of Palestine (PFLP).

The first Israel Apartheid Week was held in Canada in 2005 and co-organized by Al-Awda, which became part of a coalition that is part of the BNC today.

The BNC serves as the Palestinian arm of the BDS movement and helps to coordinate international BDS efforts. It operates the website Bdsmovement.net that serves to educate and update readers on its activities. As such, despite messaging that IAW is a grassroots movement, the campaign is, in fact, largely guided from above by the terror-led BNC, which decides on the exact message, creates relevant hashtags and serves as the central source of information propagated during each IAW.

At Emory University in Atlanta, in correspondence with Emory Eagles for Israel’s “Israel Week,” mock eviction notices were found outside of dorm rooms, stating the dormitory would be demolished in three days, apparently by the school’s Students for Justice in Palestine (SJP) chapter to teach a lesson about “the destructive policy of Israel, toward Palestinians,” which includes Israel’s razing the homes of terrorists and their families.

Such eviction notices is a tactic for anti-Israel groups on college campuses. In 2014, they appeared at schools such as Binghamton University, Harvard University, Northeastern University and New York University.

At Brooklyn College in New York, a flyer for IAW was circulated by SJP that suggests the entire Jewish state lacks legitimacy: “Come check out our recreation of the apartheid wall set up by settler-state Israel between occupied Palestine and current Palestinian territories,” it states.

“Note carefully the words in the flyer,” says CAMERA Fellow Aliyah Jacobson, who heads the CAMERA on Campus-supported group Bulldogs for Israel at Brooklyn College. “This isn’t about creating a Palestinian state; it’s about abolishing the Jewish state. It assumes the whole land is occupied, which suggests Israel shouldn’t exist at all.”

“What SJP’s really calling for is the elimination of a 70-year-old member country of the United Nations,” said Jacobson.

“There are a number of different approaches to handling IAW on campuses, but we Bulldogs for Israel believe that facing the lies and exposing incredulous support of violence must always be included in the strategy,” said Jacobson.

“This kind of repugnant caricature of Jews is a sore reminder of blatant anti-Semitism from the dark ages of medieval Europe, when anti-Semitic propaganda depicted Jews as satanic consorts and an incarnation of absolute evil,” posted Columbia Students Supporting Israel on Facebook. “Physically, Jews were portrayed as menacing, hirsute, with boils, warts and other deformities, sometimes with horns, cloven hoofs and tails. It is extremely painful to see that the same rhetoric is being used on the campus of an Ivy League university in the United States.”

“Real anti-Semitism is a serious problem in this country, and we should spend our time addressing that instead,” they told Fox News. “It’s harder to combat anti-Semitism if we falsely conflate criticism of Israel—a state that has policies that impact real people’s lives—with an entire people. Supporting Palestinian rights—and the rights of all people—goes hand in hand with fighting anti-Semitism.”

In addition to SJP, “Israel Apartheid Week” at Columbia is being sponsored by Jewish Voice for Peace.

At the end of the day, CAMERA president and executive director Andrea Levin told JNS, “The question is what the Jewish community is going to do to meet this accelerating, intensifying challenge.”