Either us or them

(text in blue banner over flag of Israel)

(text in white circle in center of poster)

(text in red banner under flag of Eritrea on the left)

A city of infiltrators

(MAHAL, the letters for Likud when voting)

The Right Wing of Tel Aviv-Yafo

Controversial ‘It’s us or them’ posters to come down, but only because ad purchase has ended; spokesman says, ‘If you don’t like it, don’t vote for us’ 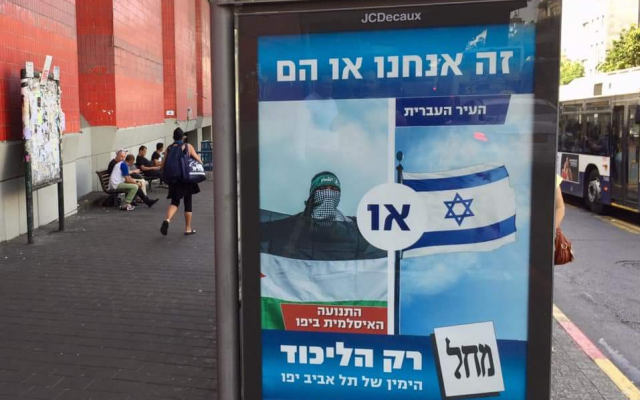 The Tel Aviv Likud party vowed Wednesday to stand behind a controversial election campaign that targets Arabs, leftists, and African asylum seekers and has been roundly condemned by rights groups and Tel Aviv Mayor Ron Huldai.

The campaign slogan, “It’s us or them,” features an Israeli flag contrasted against images of a masked person holding up the Palestinian flag or asylum seekers with the Sudanese flag.

The posters began appearing last week plastered on bus stops across the city.

“It’s a Hebrew city… or a city of infiltrators,” reads one campaign poster, using the government’s preferred term for African asylum seekers. “It’s a Hebrew city… or the Islamic Movement in Jaffa,” reads another, referring to an outlawed Islamist organization. A third poster reads “It’s a Zionist education… or Breaking the Silence in school,” name-checking the left-wing NGO that collects accounts of misconduct by IDF soldiers against Palestinians. 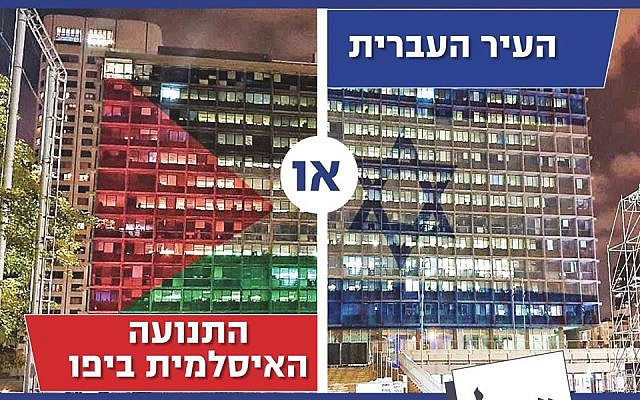 A screenshot of part of one of the Likud campaign’s “It’s Us or Them” posters. (courtesy Facebook)

On Monday, Huldai said Likud had agreed to his request to change the campaign and said it “has no place in this city.”

“In Tel Aviv-Jaffa, there is no ‘us or them,’” Huldai wrote on Twitter.

But on Wednesday, Tel Aviv Likud party spokesman Uri Wollman said Likud will continue using the slogan, though the signs will be removed in the coming days as the week-long contract with the company that rents the sign space has ended.

“It’s sometimes not nice to hear, but this is our truth, this is our reality,” said Wollman. “What Huldai said, yes it’s true, the signs are coming down, but we stand behind this campaign.” 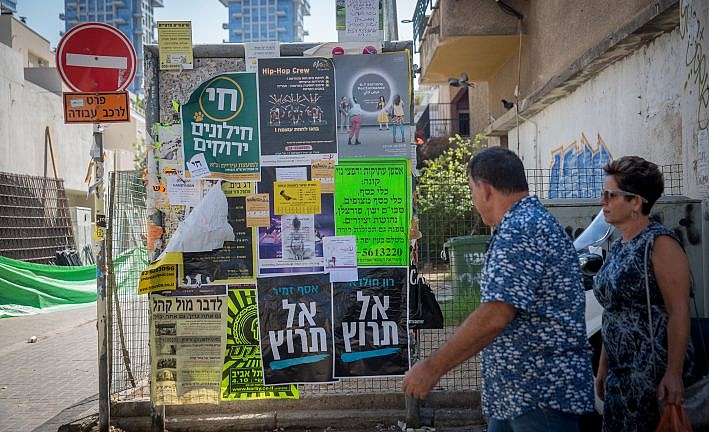 “We are in the midst of a fight for the character and identity of this city,” said Wollman. “The first part of the fight is the infiltrators in the south of the city. The Likud government has tried to get them out of here. We are doing everything possible to get them out of Israel. The other things we see is that the Islamic Movement is taking over Jaffa,” said Wollman, citing the presence of Islamic Movement flags at recent protests in the city. “We have no problem with law abiding Arabs, but we won’t tolerate the Islamic Movement in Tel Aviv.”

Likud currently has two city councilor seats and is not fielding a candidate for mayor. “We’re going to continue to say [‘it’s us or them’]. Anyone who doesn’t like it doesn’t have to vote for us,” Wollman said.

Candidates from other parties have slammed the campaign as racist.

“You saw that incitement and division worked so well for you on a national level, let’s stir it up on a local level?” Assaf Harel, a mayoral candidate, wrote on the Facebook page of his party “We Are The City.” “This is not a legitimate campaign and the fact that the ruling party is using it again and again and again without paying a price is an embarrassment to our society that is becoming increasingly divided, conflicted, and full of hate for the ‘other.’” 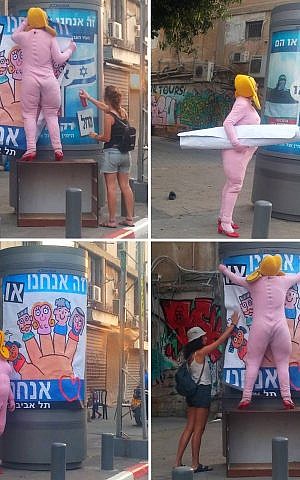 Performance artists Shoshke Engelmayer puts up posters of her own design stating “It’s Us… or Us” on Saturday, October 6, 2018. (courtesy Facebook)

Performance artist Shoshke Engelmeyer, a character who wears the bodysuit of a voluptuous naked woman with blonde hair, put her own poster up over the Likud posters — cheerful, colorful posters with a big heart stating “it’s us… or us.”

“We are all human beings, and the only choice we have is to learn to bridge our differences and live together, ” Engelmeyer told Channel 10, clad in a modest fur coat, on a tour of news programs that interviewed her about the guerrilla performance.

The list for “We Are The City” includes Arab Israeli lawyer and affordable housing advocate Amir Badran in the number two position and a Congolese refugee, Maria Joze, in the 11th position.

Previously, Congolese asylum seekers, many of whom came in the early 2000s, were able to stay as Israel deemed there was a credible threat to their safety if they returned to the Democratic Republic of Congo, which has faced civil war and upheaval. But on Sunday, Interior Minister Aryeh Deri and the Foreign Ministry issued a statement saying there was no longer any “impediment to the expatriation” of Congolese citizens. 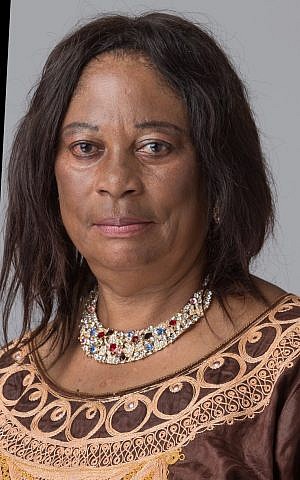 Maria Joze, a Congolese refugee, has been in Israel since 2001. (Courtesy We are the City)

Joze is one of seven Congolese families that has refugee status from the Interior Ministry, so she is not under threat of deportation. Joze, 64, arrived in Israel in 2001 and received refugee status in 2004. She told the Haaretz newspaper she will join the city council “with tears in my eyes to demand the government not deport my community.”

Antagonism in Israel toward migrants has hardened in recent years. There are an estimated 38,000 asylum seekers, the majority from Eritrea and Sudan. Most of the asylum seekers are concentrated in Tel Aviv’s southern neighborhoods, drawing hostility from Israeli residents incensed over the crumbling infrastructure in neighborhoods that were not built to hold so many residents.

According to a Pew Research Center survey last month, 57 percent of Israelis oppose accepting refugees fleeing war and conflict, ranking well behind that of citizens in many other Western countries.

The asylum seekers say they are refugees fleeing conflict or persecution, but many Israelis view them as job-seekers who threaten the Jewish character of the state.

Times of Israel staff contributed to this article.