Bezalel cites freedom of speech after student put up posters with names of Palestinians killed in clashes, prompting minister to ban academy from science convention 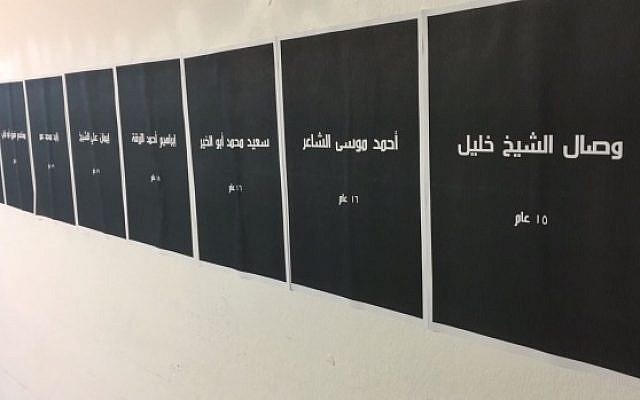 An exhibit put up at the Bezalel Academy of Arts and Design in Jerusalem on May 16, 2018, featuring names of Palestinians killed in protests and clashes on the Gaza border. (Im Tirtzu/courtesy)

An arts school in Jerusalem drew outrage Wednesday after dozens of posters were put up on its walls, displaying names and ages of Palestinians killed in clashes on the Gaza border.

Other banners at the Bezalel Academy of Arts and Design featured a map of the Gaza Strip with the words “not your toy,” a reference to Israel’s 2018 Eurovision Song Contest winner “Toy,” by singer Netta Barzilai.

The Hamas-run health ministry in Gaza said 62 Palestinians were killed Monday and Tuesday in clashes. Israel said many of those killed were members of Hamas and the Islamic Jihad terror groups who were using the violent protests as cover to carry out attacks and damage the border fence. Hamas said Wednesday that 50 of the dead were its members, and earlier in the week the Islamic Jihad terror group claimed three.

The display was made by a group of Arab students, one of whom said that “we are all Palestinians, we are all one nation and that is our only way to make our voice heard.”

“There are a lot of people who don’t know what’s happening in Gaza and don’t know how many people died, so we reminded them,” she added, according to the Ynet website. 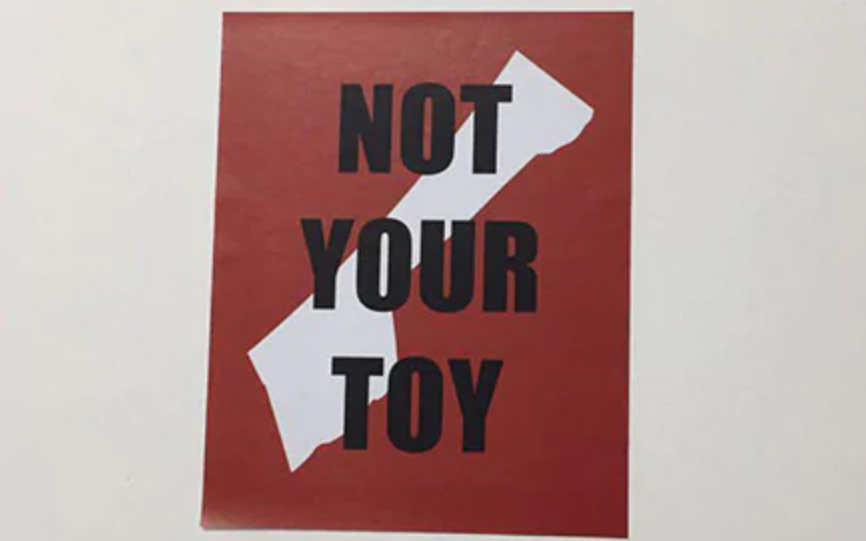 A poster put up at the Bezalel Academy of Arts and Design in Jerusalem on May 16, 2018, with the words ‘not your toy’ and a map of the Gaza Strip to protest Palestinians being killed in clashes. (Im Tirtzu/courtesy)

But other students said the exhibit was hateful and supportive of terrorism.

“Praising people whose sole goal is to kill Jews is not the right way,” said one student, who noted that counter-posters were removed from the wall within “minutes.”

“Again we are witnessing a shocking phenomenon in which hateful posters expressing pride for terrorists are distributed,” said Dudi Eltsufin, who heads the school’s student group associated with the right-wing Im Tirtzu movement.

The display was also slammed by political figures.

Knesset Speaker Yuli Edelstein said that while freedom of speech was a “top value” for him, “people, even artists, needs to know how to limit themselves. I would suggest that the new self-styled protest artists remember that our soldiers on the Gaza border are also guarding them.”

“I am always in favor of freedom of speech, but I won’t enable freedom of humiliation,” Akunis said. “Even Hamas has announced that those killed on the Gaza border are its members, meaning terrorists.”

Bezalel commented: “The academy at Bezalel is a safe zone for freedom of speech in Israel, and it enables the students to engage in free, critical and creative discourse in the various subjects that interest them.”

The arts academy was previously embroiled in a similar affair when a poster featuring Prime Minister Benjamin Netanyahu’s face behind a hangman’s noose stirred political condemnation in December 2016. 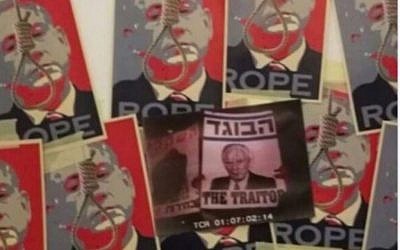 That work by a first-year art student, posted on a stairwell wall, showed multiple images of Netanyahu with the noose surrounding a single image of assassinated prime minister Yitzhak Rabin, which carried the slogan “Traitor.”

The caption on the poster read “Rope,” and echoed a 2008 presidential campaign poster of Barack Obama — except that the Obama poster was emblazoned with the word “Hope.”

The academy ordered the poster to be taken down, and, the following day, Attorney General Avichai Mandelblit ordered an investigation into alleged incitement. Police questioned the student soon afterwards but closed the case two months later.

Sue Surkes contributed to this report.

Bezalel Academy of Arts and Design